Around 1959 my parents decided to open a gas station in Cruz Bay. My father, being an ace mechanic would also repair vehicles. The first thing we had to do was build the building. A Sears pre-fab was chosen, ordered and shipped to us from who knows where. The only thing we didn't do was dig out the foundation and pour the concrete slab. As for the rest of it, the four us built the two door garage entirely by ourselves. By 1960 we were open for business, selling Mobil gas. We also had the dealership for Jeep and Land Rover. This is Erva and me on opening day. Dad is just visible to the right. Erva was a tall lanky 14 year old, I was a tiny 10. For years people thought I was a lot younger because I was so small compared to her.

The picture below shows part of the pre-fab and the Mobil sign on the slab where the gas pump was. The siding on the garage was a pale pastel mint-green, pleasing and easy on the eye. See the block "cistern" to the left?
That's were the metal tank was that held the gas. The gas came in 55 gallon barrels that had to be pumped/dumped into the tank. Mom, Dad, Erva, me, and my cousins Frances and John, who were visiting from Puerto Rico, made a chain and hauled every single one of those concrete blocks from the place they were off-loaded to the site. The trailer in front of the cistern was also a Sear purchase and hauled everything from our boat the FDO, to rocks and furniture.
This is a picture of the concrete slab where the gas pump was. There was a rack next to it that held cans of oil.
Erva and I were the attendants. Erva handled the pump while I checked the water in the radiator and battery or washed wind shields. We also checked the oil and air in the tires. We were, as far as I know, the first and only female gas pump attendants ever on the island of St. John. Erva and I worked the pumps, whenever we weren't in school, for two years. When the power went out we could pump gas by hand. We were also grease monkeys. We washed parts and tools (in gasoline), sorted transistors, screws, nuts and bolts, and slapped undercoating (a tar-like substance) on the new Jeeps and Land Rovers when they arrived. We would wash ourselves off with kerosene or diesel fuel.
This is the Willies station wagon Dad painted. It was also our advertising. White roof, red above the chrome, blue below with a red Pegasus decal on the door.
That's me in the door, standing in front of Dad's motorcycle, the All State, yet another Sears purchase. All of us Virgin Islanders depended on Sears. They were reliable and trusted. The name Sears was gold.
In 1962 we closed the business and moved to St. Thomas. My father was physically exhausted and got a less physically demanding job as the chief engineer for the only TV station in the islands.
The Sears building evolved into other businesses. For many years it was a gift shop and restaurant called Islandia. I sold a lot of my shell and seed work there. The interior has been changed and altered but 50 years later the building still stands and is still in use. It has survived floods and hurricanes.The aluminum siding has never been repair or replaced, only painted various shades of yellow. 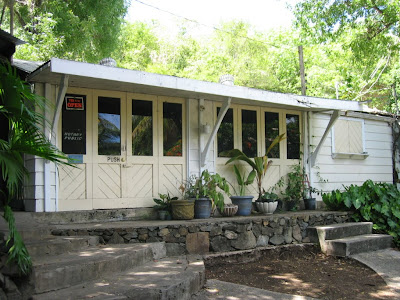 The roof is the same roof too. 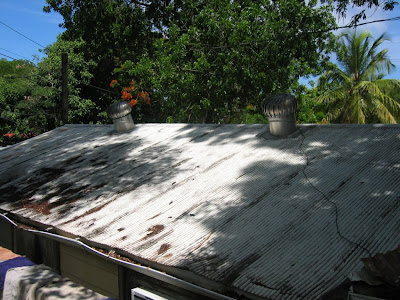 Technically, at 50 years old, this Sear pre-fab could be considered an historic building. Certainly to our family it is. What's really nice is that we still own it. I wonder how many of these pre-fabs are still out there, and how many have been in continuous use since they were built? And how many of them are in the Caribbean? I would bet ours is the only one in the Virgin Islands. Do you think Sears would be interested in paying us to do an ad, you know like those Toyota truck owners whose trucks have gone like 400,000 miles? Do you think I should find an email address and send them a link to my blog so they can read this? 50 years! That's a lot of very loyal service.
Posted by Bish Denham at 12:01 AM