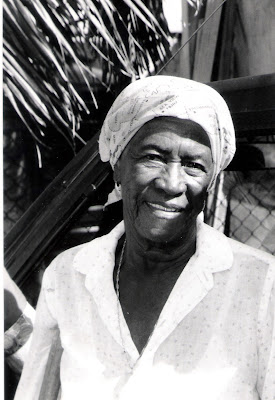 Lucy Smith-Prince, known to all as Miss Lucy or Mama, was, to the best of my knowledge, born on St. John while the islands were still under Danish rule and was perhaps a year or two old when they became an American possession in 1917. She knew a great deal about the history and loved telling stories of growing up on the island.

She was the first female taxi driver on St. John. I wouldn't be surprised if she started driving tourists and people around as soon as the first jeeps arrived after the first roads were bulldozed in, sometime in the early 1950's. Her jeep was the first to have a one-of-a-kind hood ornament; a pair of ram's horns which she stuffed with fresh hibiscus, oleander and/or bougainvillea each day. Every morning she and her jeep could be seen in Cruz Bay down at the dock waiting for the ferry to come it. Tourists who got her as their guide were for sure going to get a good tour and go home with many memorable stories.

When she laughed, her whole face and head took part in the action. Her eyes would crinkle up to into tiny slits which made you wonder how she could see. And she had this thing she did with her chin. It would sort of move towards her neck, and like her eyes, almost disappear.

Whenever my best friend and I were hiking between the beaches, if Miss Lucy happened to pass us on the road and she had room, she always stopped and gave us a lift. This always provided an opportunity to gossip and pass on news.

Miss Lucy was, like Miss Meada and Roy Sewer, a person my mother knew from her childhood, someone she loved and respected. That love and respect was passed on to me and my sister.

In her later years, she opened a restaurant at her home in Estate Friis, a rocky beach on the south side of St. John, past Coral Bay and on the way to Salt Pond. She was an excellent cook and her cuisine was local; fish and fungi, pigeon peas and rice, fried plantain and coconut tart. Below is a video I found taken by visitors to her Sunday Brunch. (You can hear live jazz being played in the back-ground.) It mostly shows the beautiful view from the beach. A view of Coral Bay, and the point of land called East End. When it pans to the right, the British island of Tortola can be seen in the background. But it also shows where people sit at tables outside, under a huge old seagrape tree.

Miss Lucy died at the age of 91 in 2007. One more piece of the past gone from us. I for one am glad/happy/honored beyond measure that I knew her personally.