As I mentioned earlier, the highlight of the approaching Christmas season was the arrival of the Sears Wish Book.

There were a few things I wanted most every year but never got. Like the castle under siege with all those foot soldiers and knights on horseback. I also wanted a batch of cowboys and Indians. One year I wanted a doctor's bag with all the doctors instruments. I got a nurses bag instead. It came with little vials of sugar pills and a pretend syringe. Because I hated getting shots I decided I wanted to be a nurse so I could give shots to bad children. I thought it was the perfect punishment.

A lot of times I got things I didn't expect. One year in particular was a windfall. I woke up to a play stove and a hutch. The stove had knobs I could turn and an oven door I could open. The hutch had shelves above and a cabinet below with doors and shelves. They were made out of cardboard. But what was really neat is what came with the hutch and stove: a complete cooking set of pots, pans, baking wear, and a china tea set, with plates, cups and saucers, tea pot, sugar and creamer.

I actually baked real cakes and cooked with my pots and pans on my mother's real stove. One time I baked a cake for our dog's birthday. The only problem was that I used salt instead of sugar!

The tea set was real china, and the willow pattern. A few years back I saw a set just like mine for sale at an antique store. I would have bought it (though I don't know what for) if it hadn't been so expensive.

I have one piece left from each. The plate resides on my dresser. As for the pot...I can't tell you how much butter it has melted over the years to be poured over pop corn. It still lives in the kitchen, hanging over the stove and is still used. 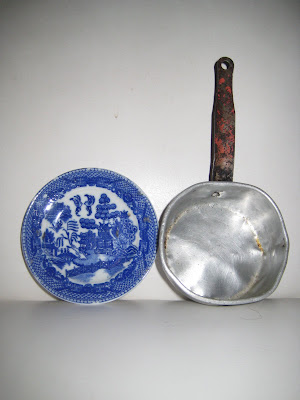 Quelbe (pronounced quail-bay) is the traditional music of the Virgin Islands. For your listening enjoyment I will be including, at the end of my next few posts, some Christmas music by Stanley and the Ten Sleepless Knights, a famous quelbe band out of St. Criox. Stanley plays the flute.