I have always had a deep fondness for donkeys. Their general behavioral traits have given them a bad rap. The most noted one is that they are stubborn. But think about this; donkeys, for their size, can carry quite a lot of weight, they are extraordinarily sure footed, they do not require a stable and are quite content to spend their lives out in the elements, plus they are not fussy eaters, eating almost anything available. In many places donkeys are used to protect sheep and goat herds from coyotes (when a donkey is raised among them they become fiercely protective; when threatened their sharp hooves can be deadly.) Lastly, they are smarter than horses. And this is where their reputation for “stubbornness” comes from.

A horse can actually be run to death. It doesn’t know enough to stop and rest. Some might call this devotion to the rider, or some such thing. I say it’s stupidity. A donkey, when it’s tired will stop and not budge until rested. If the load its carrying is too heavy, it will not move, or it may well get down on the ground and roll to get the load off its back. It knows its own limitations. Not even a beating will make it move a hoof.

The only true thing about donkeys is when you are riding them, and they run, you have to have a strong spine as theirs is a stiff legged trot that is quite jarring. However, their usual slow plodding pace is easy. Remember, Jesus didn't ride a colt into Jerusalem, he rode a young ass.

At different times during the years we lived on St. John, we owned two donkeys.

Erasmus was the first.
He was large for a donkey standing at the shoulder a good 13 to 14 hands high. A male who had been gelded late in life, he retained fond memories of the ladies. At least once he took off running after a female while my sister and I were on his back. There I was on the “rumble” seat, arms wrapped around Erva's waist, hanging on for dear life.

We acquired Erasmus when I was about 6 ½ or 7 years old, about the time we moved from Cruz Bay up to Gifft Hill. Sometimes we rode him to school, a three mile journey into Cruz Bay that started somewhere around 6:30 or 7 in morning. We’d tie him up under the old tamarind tree across the street from the school and at 3 PM ride him back home.

Erasmus had a few distinct quirks. We learned early on he would chew through his tether rope and go wandering off in search of his favorite snack, a parasitic leafless vine called yellow love. 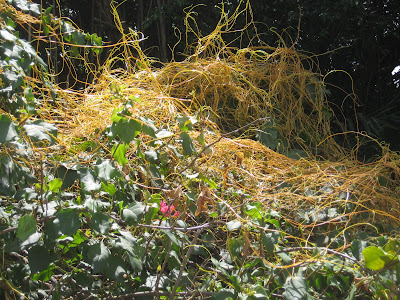 Yellow love kills what it grows on.
We soon changed the rope to a chain and often wondered what he experienced the first time he tried to chew through it.

Another quirk was what he did when we tried to mount him. He would stand patiently while he was being saddled, the epitome of good behavior. But once one of us went to put foot into stirrup he would kick his left rear leg forward, acting for all the world as if he wanted to get his own hoof into the stirrup and climb up onto his own back. We had to time getting a foot into the stirrup and swinging up onto his back between kicks. But once in the saddle he was generally well behaved.

Except for once. I don’t think it was too long after we’d moved to Gifft Hill and we had acquired him that Mom decided it was time for me to take my first lesson in riding him solo. Now I had already ridden him many times with Erva, mostly riding on his rump while she was in the saddle. But sometimes, with her in the rear, I rode in the saddle and learned how to handle the reins.

On this particular day he stood patiently as Mom saddled him. I learned how to time getting my foot into the stirrup, and voila! I was up on in the saddle. The intent was for me to ride around our large yard with Mom and Erva near at hand. But Erasmus had plans of his own.

Maybe he sensed I was a bit afraid. Maybe he thought, “Ha! Novice rider, I’ll teach her a lesson she won’t soon forget.” Maybe he had an itch on his back. Or maybe he was in a bad mood. Whatever was going on in his donkey mind, it soon became apparent he didn’t want to be ridden. He pulled hard against the reins, dropping his head towards the ground. Mom and Erva were both yelling at me to pull up on the reins. But I couldn’t keep his head up. I wasn't strong enough. He dropped to his front knees. I’m screaming. “He’s gonna roll!”

Mom, calm as anything says, “Just step off when he gets to the ground.” Which somehow I managed to do. And there was Erasmus rolling in the dirt, kicking his legs heavenward like a dog, until the saddle was hanging down around his belly.

When he was through he was easily caught and stood patiently while he was unsaddle, acting for all the world as if nothing had happened. And I learned I could easily step off a donkey should it decide to roll.
Posted by Bish Denham at 12:01 AM