It's All About Lizards - Part III - My Bedrooom Lizards

As a teenager there were three lizards who lived in my bedroom, two males and female. One male was very dark brown, almost black, the other was a deep olive green. They each had their own wall and window which they patrolled. I named the dark brown one Sauron and the green one Frodo. (Can you tell I was into The Lord of the Rings?) They showed up at different times and seemed to co-exist quite nicely. 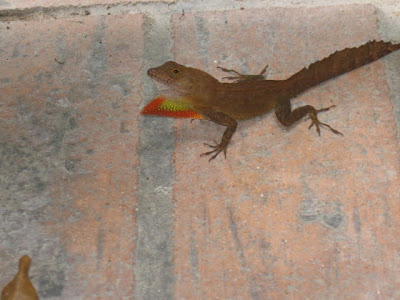 But it is the little female that I was most fond of. I named her Celeste, after a favorite Donavan song of the same name. What made her so unique is that I only saw her when I played my guitar and sang. From out of nowhere, it seemed, Celeste would appear. Wherever I happened to be in my room, she would be a foot or so away. She would be on the wall near my head, or on my bedside table, or my pillow. She would cock her little head from side to side as if carefully listening to each note, each song. As soon as I stopped playing and singing Celeste would disappear. She was my first devoted fan.

Here’s a picture of a little female that looks very similar to my dear Celeste. 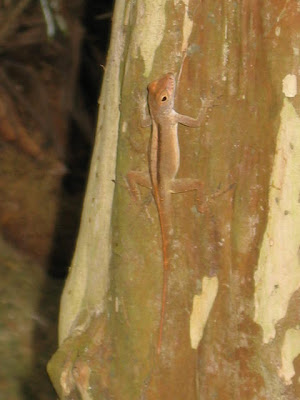 Part IV will explore (HA! a rhyme!) a variety of other kinds of lizards.

Email ThisBlogThis!Share to TwitterShare to FacebookShare to Pinterest
Labels: Lizards